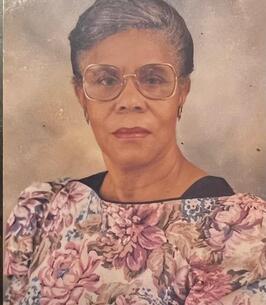 Dorothy Theresa Chambers, of Kingston, Jamaica, West Indies, affectionately known as Sister Joyce, CJ, and
other loving names, passed away from an injury and short illness at the age of 89 years. Dorothy would have
been 90 years old in January 2023.
Dorothy resided at Workmen’s Circle MultiCare Center, Bronx, NY until her injury. She spent her final days at
Calvary Hospital, Bronx, NY until July 25th, 2022, at 12:15 am.
Dorothy McLean was born to Lafite and Miriam McLean on January 27th, 1933, in Kingston, Jamaica. She was
the eldest of nine children and raised seven children of her own with her husband Rudolph Chambers.
Dorothy is predeceased by her husband Rudolph Chambers, parents Lafite and Miriam McLean, her sister
Audrey Ross, brother Godfrey McLean, and grandsons Kristoff Chambers and Ryan Chambers.
She is survived by her children, grandchildren, and great grandchildren. Her children are Clive Chambers,
Patricia McIntosh, Mark Chambers, Raymond Chambers, Christopher Chambers, Wayne Chambers, and
Jerome Chambers.
Granddaughters: Rhonda Nicholas, Marsha McIntosh, Carole-Anne Chambers, Lori-Ann McIntosh, Jodi-Ann
Chambers-Bernabe, Mary Chambers-Woodley, Jhanae Chambers, Shadae Chambers, and Rayanna Chambers.
Grandsons: Rinaldo Chambers, Wayne Chambers Jr., Rhajae Chambers, John-Mark Chambers, Stephen
Chambers, Reheem Chambers, Akeem Chambers, Peter-John Chambers, and Jordan Chambers.
Great Grandchildren: Sayiid Nicholas, Seif Nicholas, Kailei Chambers, Ronnell Chambers, Rahan Chambers,
Aliyanna Chambers, and Masai Woodley.
Dorothy’s siblings are Cynthia Barrett, Earl McLean, Douglas McLean, Ralph McLean, Errol McLean, and Claudette. While living at home in Jamaica, she worked at the University of the West Indies and still found time to be an at home hairdresser while taking care of her husband and seven (7) children. She sometimes also fed extended
members of the family and friends. Her life in the U.S. was also about helping others as she worked at the Jewish Home and Hospital for the Aged where she sat with the residents reading, talking, and even praying with them. The families of the residents she took care of loved her for taking such wonderful and attentive care of
their loved ones. Dorothy was truly a loving, caring person, who never turned anyone away when they needed help. Our Mom and Grandma was a philanthropist in her own way and will be missed by all that knew her,loved her, and cared for by her.